A celebration to mark 100 years of the opening of the Manurewa Children’s Home was held 23 October at Manurewa Baptist Church. Iosis and the Baptist Children’s Trust co-hosted the event.

Approximately 80 former residents, staff, board members, supporters and family members came from as far as Australia to mark the centenary.

The Home’s presence in Russell Road was well-known, especially in its earlier years when its large structure was clearly visible across neighbouring farmland.

It was purpose-built in 1914 on 3ha of land donated by a group of businessmen. At the time it was valued at £10,000 and built to accommodate up to 60 children. The Baptist Union of New Zealand owned the Home, with financial and practical support from churches nationwide.

Although sometimes colloquially referred to as an orphanage, children in the Home were not necessarily orphans. In the days before social welfare assistance, some children were admitted to the Home because of illegitimacy or desertion, and others because of the illness or death of one parent.

Changing attitudes to residential childcare led to a move to more use of foster homes in the 1980s. This new emphasis meant the pattern at the Manurewa Children’s Home changed from a place of long term care to one of short term and crisis care, and it eventually closed in 1989.

The Home itself was later sold to a private owner who converted the building into apartments. Iosis owns a couple of staff cottages of the time, which are now used as a family learning centre and administration office. 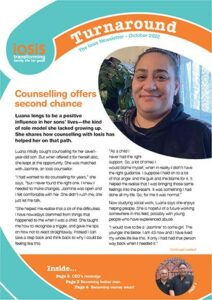