‘I’ve stopped making excuses for myself’

After a lifetime of drug dependency and abuse, Dylan was at rock bottom. Then he took an Iosis parenting course. Then further courses. Now, for the first time in 18 years, he’s clean, ready to be a father and has turned his life around.

Dylan started smoking marijuana when he was 13 years old. As a child, he had been diagnosed with ADHD and was prescribed Ritalin. His abusive father came in and out of their lives – two to three times a year he’d move out. “It was a good break for me”, says Dylan. “When he was there, I lived in fear of getting a hiding.”

At 15, Dylan had been expelled from one Auckland college and was selling his Ritalin to buy marijuana. By 17, he’d left school to start an apprenticeship, but before long, his drug habit was out of control and getting high soon became the most important thing in his life. His parents kicked him out of home, so he threw in his job and moved in with his mates. He worked on and off, continuing to sell Ritalin to fund his drug habit. By 19, he was on the streets, getting stoned every day.

From drug abuse to domestic abuse

Dylan met his son’s mother, but “it was a very toxic relationship”, he explains. “I was smoking meth and didn’t treat her well.” She fell pregnant and they split up. For a while, he moved to the Waikato where he found a job and cleaned up his act for a few months.

Then he moved back to Auckland. “The day I moved back I started using again, all day, every day.” He found a job as a chef where he met Shannon, who became pregnant within six months. “I found I was starting to get a lot more volatile. If I didn’t get my drugs, I became very abusive, verbally and physically. We’d had our daughter by then and it wasn’t good.”

“We split up due to my behaviour and a parenting order against me. I hit rock bottom and started smoking meth heavily. Shannon wasn’t coping well and OT became involved.” They got back together, but had nowhere to go, so they went to De Paul house. “I was out of control and we had terrible fights. The police were called one day and I was arrested. I spent my son’s eighth birthday in a cell and it was the final straw for both of us.”

“When I was released from jail, I went to church with my sister. I’d never been a churchgoer but being in jail had given me lots of time to think. I just sat there and cried.”

Dylan’s sister had done a parenting course and suggested Dylan do one too. “It was great – people didn’t judge me: they just accepted me,” he says. “That’s when change started for me.”

The courts had ordered Dylan to take an anger management course, so he did that too. He got a job, found a flat and undertook the Iosis MenD course.

“I realised I was only going to get out of it what I put in. I also realised that I had become my father in many ways and I didn’t want to be that.”

On the road to recovery

“I learnt lots of new skills and ways of communicating. I realised how bossy and overbearing I had been to Shannon. It was my way or no way – I had taken her voice away, her right to say no. The course opened my eyes to my behaviour and that I needed to change that behaviour. “

“I also did the AOD recovery programme. I loved that course – Jillian was a legend and being coached by someone who had also been through a similar
struggle was incredible. Some parts of the course haven’t been easy, but it was worth it,” he says.

“I have now been clean for 18 months. I’ve stopped making excuses for myself. In the past my ADHD was always my excuse, but it’s not a reason and doesn’t excuse my behaviour. Shannon is doing really well and we’re going to do relationship counselling together and try and rebuild our family. I am hopeful we can get back together.”

Iosis is an incredible organisation – Auckland needs more organisations like theirs. The staff know what they’re doing and they can get through to people. Thank you. 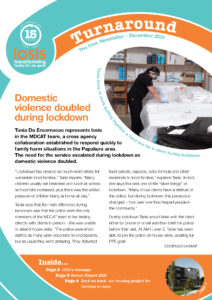