Some stories are too personal to tell. The following story is fictional and the photos have been posed by models. However the story of ‘Maia’ and’ James’ is representative of the kinds of challenges often faced by families seeking help from Iosis – relationship break-down, addictions, and violence in the home. Although the names are made up, this is reality for many families. ‘Maia’ and ‘James’ were living what they thought was an ordinary life. It was a cycle that involved James’s drunkenness, constant arguments between them, and James sometimes smacking Maia’s three-year old son, Joshua, in anger. It seemed normal to Maia because she had grown up in a chaotic environment, motherless at six and with a father who was an alcoholic.

It wasn’t until neighbours called the police, who in turn notified Child, Youth & Family, that Maia and James were confronted with the truth: they needed help. They came to Iosis and made an appointment to see a social worker. “To be honest, I never thought I’d end up in a place like this. I was angry about CYF’s threats to take away my son. I thought, ‘Where were you when I was a little girl? No one ever came to protect me.’” However, the couple quickly came to realise that Iosis was there to help them, not judge them, and so their defences dropped and they began to trust.

The social worker spoke to them about creating a family roadmap – a picture of what they wanted their family life to look like and the steps they needed to take to become a strong, healthy family. She could see that deep down they wanted to change for Joshua’s sake, so she backed them by acting as an advocate for them with CYF.
The social worker also discussed parenting strategies with Maia and James, and referred them to the Iosis Family Resilience Programme. This group programme covers identity, relationship and parenting issues. James had one-on-one sessions with a MenD facilitator, who helped him to learn better ways to deal with his anger and to get help with his drinking. Maia received counselling so she could learn how to forgive her dad and mend family relationships, which restored a sense of belonging for her. Maia and James’s journey with Iosis has taken about one year. None of it has been easy, but as they have put what they have learned into practice, they have found their home to be more peaceful and stable. They now take pleasure in simple things, like doing puzzles with Joshua, or spending time after he has gone to bed just enjoying each other’s company.

It is not perfect. Sometimes Maia and James still struggle with arguments. But they now know how to talk through those, or at least to walk away until they gain their composure. James has found other ways to discipline Joshua when he plays up, instead of hitting him. And they have found that, living in a settled home, Joshua has fewer tantrums anyway, because he is not reacting to the arguments he used to witness so often.

Slowly and surely, this family’s life is being transformed for good. 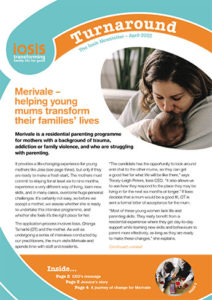