“I felt terrible about what I’d done.”

When John* saw red and beat up his 12-year old son, he knew it was time to make some changes. And fast.

John’s son had been really playing up – self-harming, stealing money, taking things from his brother’s room. The last straw was when he took marijuana to school. John’s wife usually manages the children but when that happened, she told him that he needed to deal with this. So he did, but not in a good way.

“I saw red and gave him a real good hiding,” says John. “The next day I apologised to him and felt terrible about what I’d done.” Two days later, one of the teachers at school noticed that he was bruised and OT (Oranga Tamariki) got involved. “That was on the Tuesday. On the Friday he was taken from our care.”

“The police were involved, OT were involved – I knew I had to change. I didn’t want it to happen again … there was no excuse for my behaviour,” he tells us. “I went to the library and looked up courses and came across Iosis. John says he had to wait for a couple of months as the programmes were fully booked up, then Iosis called to say a space had become available for the MenD programme with Alfred. MenD (Men’s Development) is an individualised programme that helps men development new strategies for a family life free of violence and offending.

During those two months, John moved out so his son could move back home. “He needed to be with the family so I went and stayed with my cousin. The whole thing was very stressful for everyone.”

“I didn’t know what to expect but the MenD programme was better than I could have hoped. Alfred was very supportive, encouraging and understanding – I now have the skills and tools to do things differently.”

“I went into it ready to change – and needing to change – rather than to appease an agency … and I have changed. I keep referring back to the skills Alfred has taught me – it has made a big difference.”

John is now back with his family and he and his wife are intending to do the Toolbox programme with Iosis soon.

“I now have the skills and tools to do things differently. It’s a progression rather than an immediate transformation.” 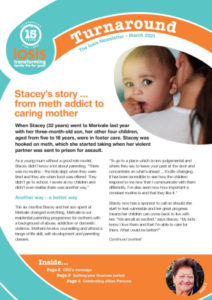